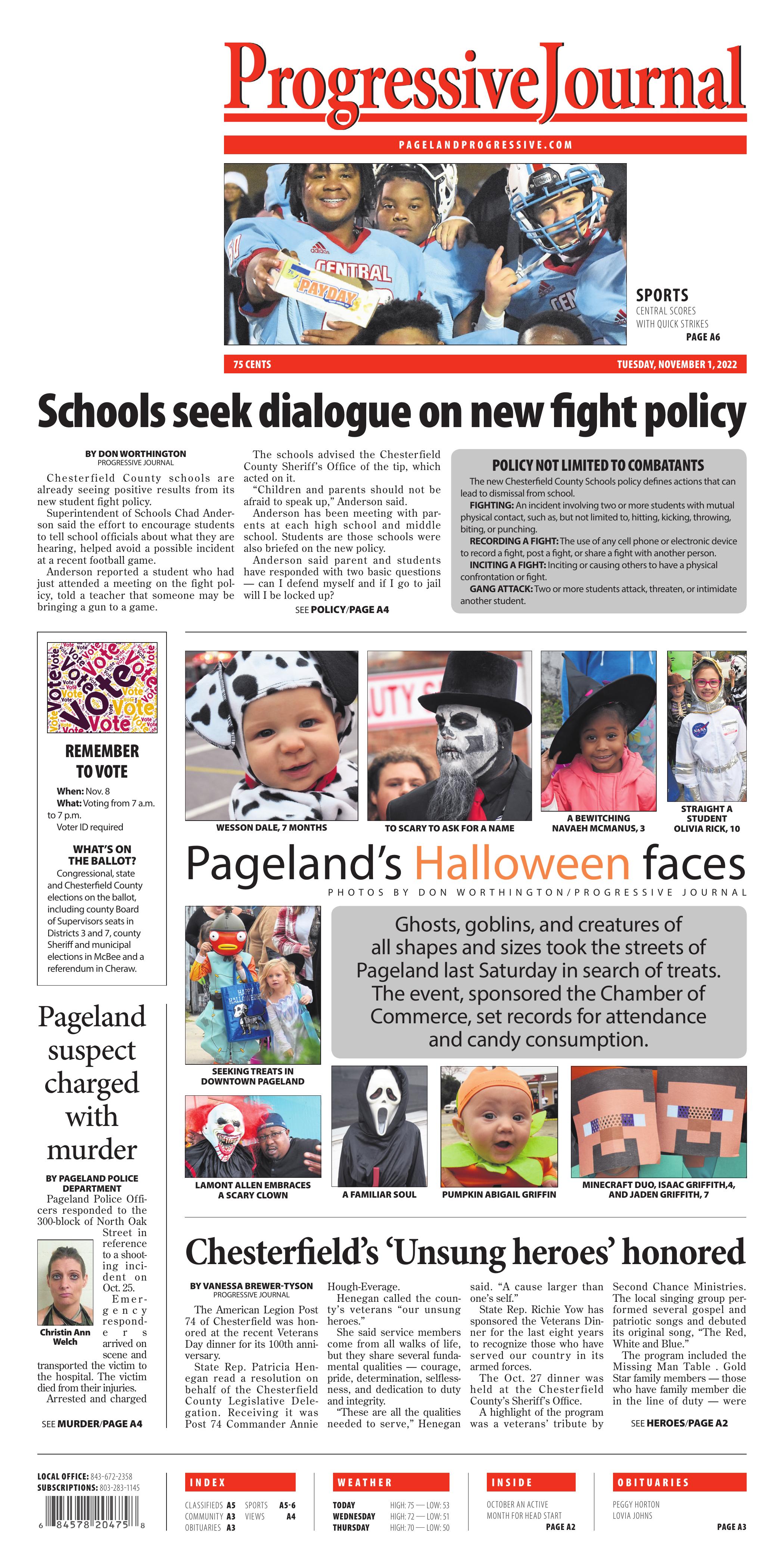 Superintendent of Schools Chad Anderson said the effort to encourage students to tell school officials about what they are hearing, helped avoid a possible incident at a recent football game.

Anderson reported a student who had just attended a meeting on the fight policy, told a teacher that someone may be bringing a gun to a game.

The schools advised the Chesterfield County Sheriff’s Office of the tip, which acted on it.

“Children and parents should not be afraid to speak up,” Anderson said.

Anderson has been meeting with parents at each high school and middle school. Students are those schools were also briefed on the new policy.

Anderson said parent and students have responded with two basic questions — can I defend myself and if I go to jail will I be locked up?

“Our objective is not to be punitive, but to create a safe, conducive environment in the schools,” Anderson said.

He said the policy focuses on the aggressor and students have a right defend themselves.

Students who are detained at the school for fighting will meet with the principal. Each principal will have a checklist to complete to determine if a student is being sent to the Sheriff’s Office where a parent will pick them up.

Items on the checklist include question such as:

Students sent to the Sheriff’s Office, will not be fingerprinted or processed.

Students taken to the Sheriff’s Office could be released to a parent, detained or released to the S.C. Department of Juvenile Justice, depending on the findings of school administrators.

Parents who disagree with the finding of the school administrator can request an appeal hearing. If they are still not satisfied, they can ask the superintendent to review the incident.

Anderson said the policy will apply at all of the county’s middle and high schools, as well as when children attend off-site school events, whether in the county or another school district.

The punishment for students violating the new policy is virtual school or alternative school for the remainder of the school year. Students will not return to the school where the fight happened.

Parents also have the option to seek other education alternatives for ther child, such as home schooling.

The policy does not apply when riding a Chesterfield County school bus. There is a separate policy covering riding a school bus.

To scary to ask for a name

Ghosts, goblins, and creatures of all shapes and sizes took the streets of Pageland last Saturday in search of treats. The event, sponsored the Chamber of Commerce, set records for attendance and candy consumption.

The Missing Man Table was on display during the Veteran’s Dinner Oct. 27, at the Chesterfield County Sheriff’s Office.

The American Legion Post 74 of Chesterfield was honored at the recent Veterans Day dinner for its 100th anniversary.

She said service members come from all walks of life, but they share several fundamental qualities — courage, pride, determination, selflessness, and dedication to duty and integrity.

“These are all the qualities needed to serve,” Henegan said. “A cause larger than one’s self.”

State Rep. Richie Yow has sponsored the Veterans Dinner for the last eight years to recognize those who have served our country in its armed forces.

The Oct. 27 dinner was held at the Chesterfield County’s Sheriff’s Office.

A highlight of the program was a veterans’ tribute by Second Chance Ministries. The local singing group performed several gospel and patriotic songs and debuted its original song, “The Red, White and Blue.”

The program included the Missing Man Table . Gold Star family members — those who have family member die in the line of duty — were acknowledged.

In his closing remarks, Yow thanked all who helped to make the program successful.

Symbolism of the Missing Man Table The table is round, to show our everlasting concern for our missing men. The cloth is white, symbolizing th…

The new Chesterfield County Schools policy defines actions that can lead to dismissal from school.

FIGHTING: An incident involving two or more students with mutual physical contact, such as, but not limited to, hitting, kicking, throwing, biting, or punching.

RECORDING A FIGHT: The use of any cell phone or electronic device to record a fight, post a fight, or share a fight with another person.

INCITING A FIGHT: Inciting or causing others to have a physical confrontation or fight.

What’s on the ballot?

Congressional, state and Chesterfield County elections on the ballot, including county Board of Supervisors seats in Districts 3 and 7, county Sheriff and municipal elections in McBee and a referendum in Cheraw.

Pageland Police Officers responded to the 300-block of North Oak Street in reference to a shooting incident on Oct. 25.

Emergency responders arrived on scene and transported the victim to the hospital. The victim died from their injuries.

Arrested and charged with murder was Christin Ann Welch, according to Pageland Police.

She was also charged with possession of a weapon during a violent crime.

This incident was an isolated incident and the suspect was taken into custody upon officers arrival. Pageland Police said this incident did not pose a danger to the public.