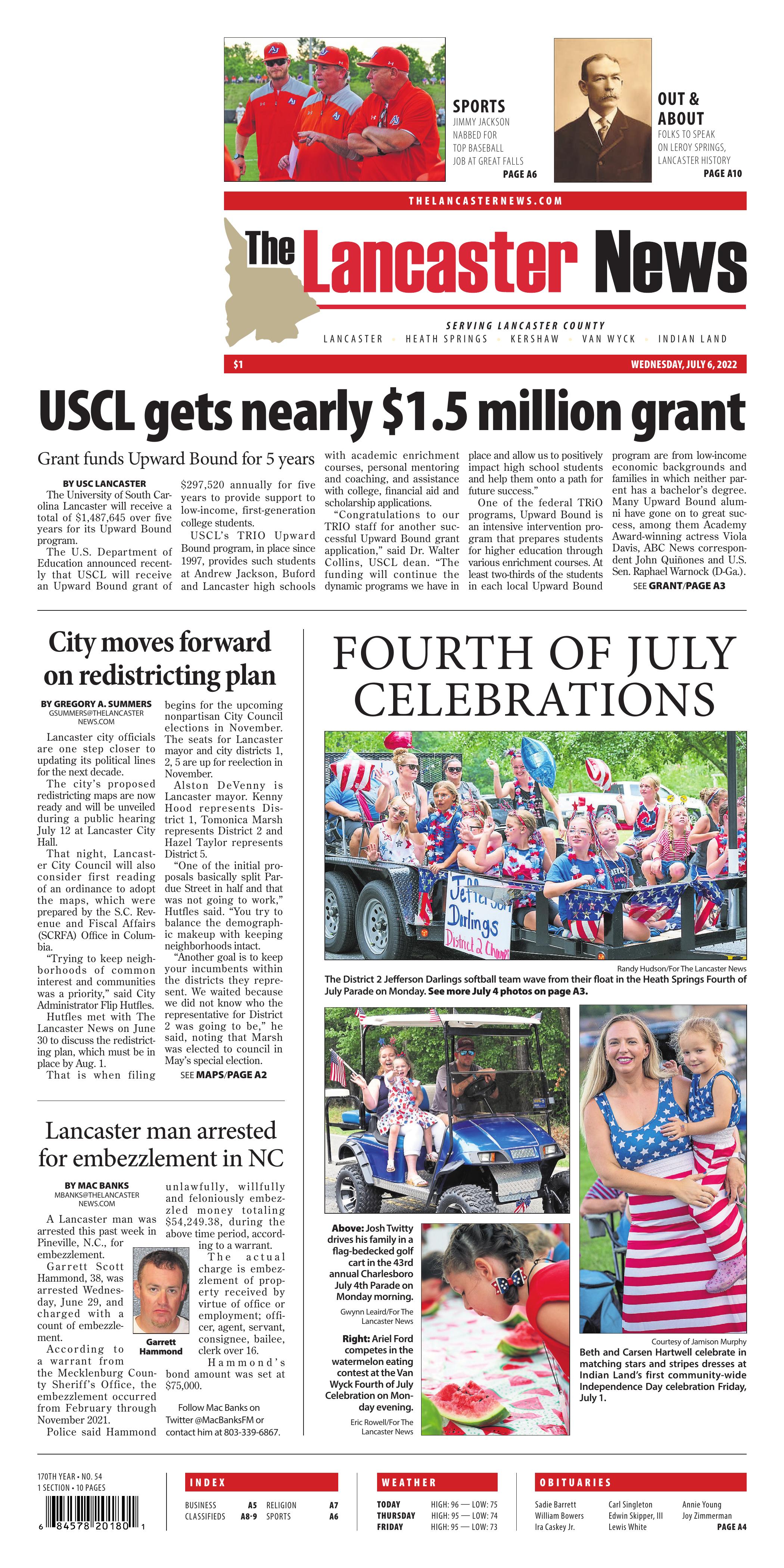 The University of South Carolina Lancaster will receive a total of $1,487,645 over five years for its Upward Bound program.

The U.S. Department of Education announced recently that USCL will receive an Upward Bound grant of $297,520 annually for five years to provide support to low-income, first-generation college students.

“Congratulations to our TRIO staff for another successful Upward Bound grant application,” said Dr. Walter Collins, USCL dean. “The funding will continue the dynamic programs we have in place and allow us to positively impact high school students and help them onto a path for future success.”

One of the federal TRiO programs, Upward Bound is an intensive intervention program that prepares students for higher education through various enrichment courses. At least two-thirds of the students in each local Upward Bound program are from low-income economic backgrounds and families in which neither parent has a bachelor’s degree. Many Upward Bound alumni have gone on to great success, among them Academy Award-winning actress Viola Davis, ABC News correspondent John Quiñones and U.S. Sen. Raphael Warnock (D-Ga.).

“For 25 years, the USC Lancaster Upward Bound program has helped over 1,600 high school students to not only graduate high school, but also to enroll in college. For the past several years, their participants had a 100% high school graduation rate,” said Matt Williamson, USCL TRIO program director.

“My staff and I are excited and humbled to serve the students who enter the program each year, especially the rising ninth-graders who enroll in our Summer Experience program every June.”

“For six weeks, rising freshmen and sophomores attend this non-residential summer bridge program Monday through Thursday to enhance their knowledge in composition, literature, mathematics, science and foreign language. Also, twice a week, participants work on team-building exercises to help improve their coping and social skills. On most Fridays, students participate in a community service project to help them develop empathy for others, as well as explore career options,” Williamson said.

According to the U.S. Department of Education, 86% of Upward Bound participants enroll in post-secondary institutions immediately following high school graduation. In 2021, more than 70,000 students participated in 966 Upward Bound TRIO projects throughout the United States and its territories.

In 1964, the Economic Opportunity Act established Upward Bound as a pilot program in response to the War on Poverty. It was the first of seven federal TRIO programs to later be authorized by the Higher Education Act of 1965 to help students succeed in higher education. It recognizes that students whose parents do not have a college degree have more difficulties navigating the complexity of higher education, bolsters students from low-income families who have not had the academic opportunities that their peers have had and helps remove obstacles preventing students from thriving academically.

“As systemic inequality and financial hardship hinder students’ success in getting to and through college, TRIO programs such as Upward Bound take on new importance because they address many of the barriers that prevent low-income, first-generation students from earning degrees,” said Maureen Hoyler, president of the nonprofit Council for Opportunity in Education (COE) in Washington, D.C.

COE is dedicated to furthering the expansion of college opportunities for low-income, first-generation students, and students with disabilities nationwide. 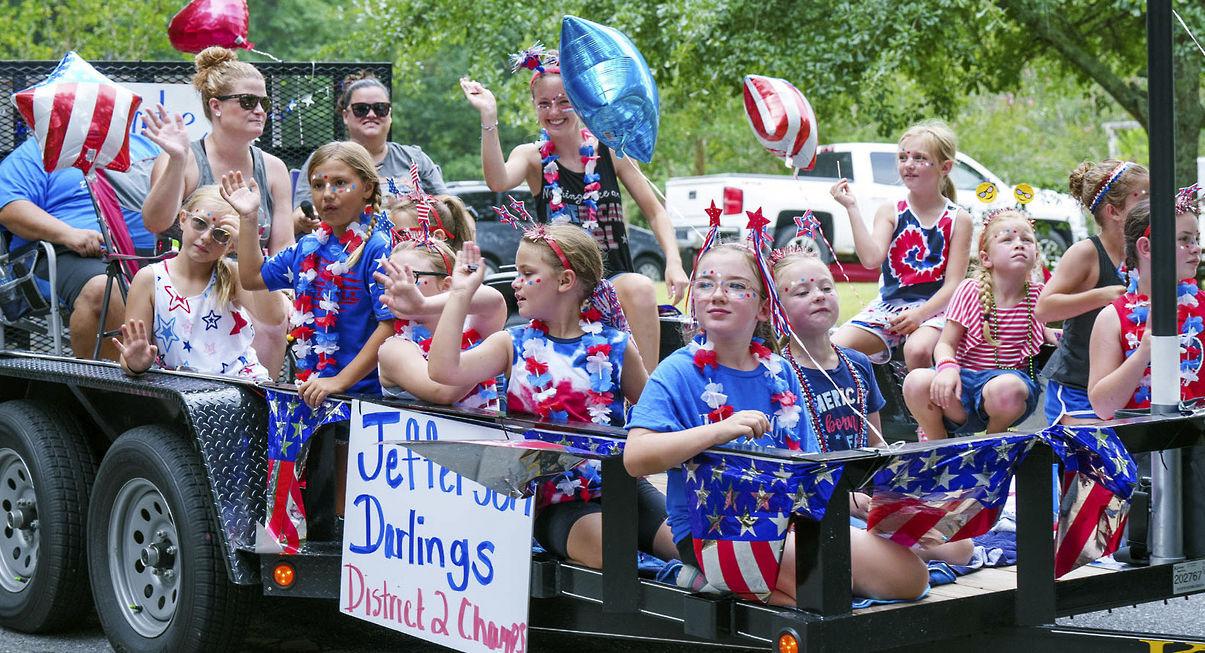 The District 2 Jefferson Darlings softball team wave from their float in the Heath Springs Fourth of July Parade on Monday. See more July 4 photos on page A3. 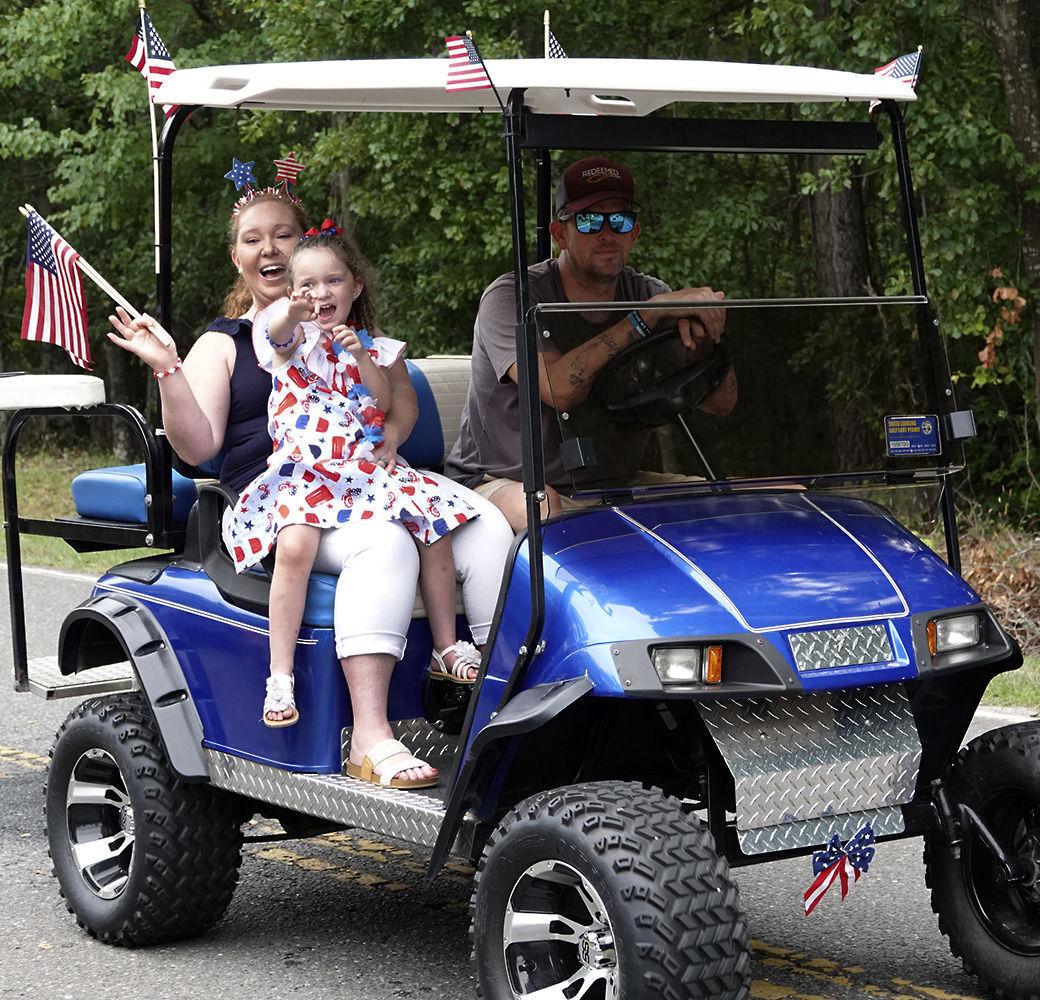 Above: Josh Twitty drives his family in a flag-bedecked golf cart in the 43rd annual Charlesboro July 4th Parade on Monday morning. 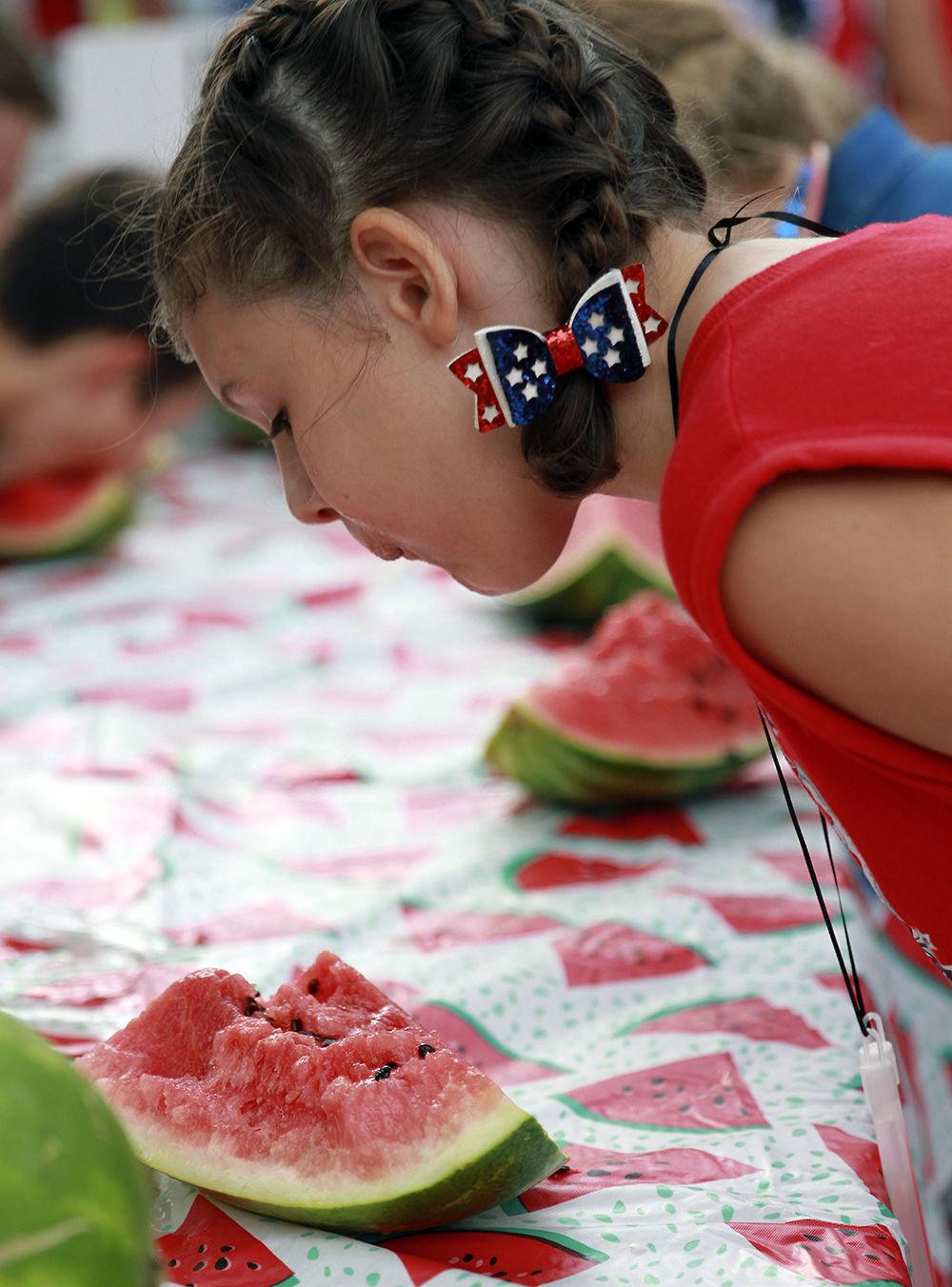 Right: Ariel Ford competes in the watermelon eating contest at the Van Wyck Fourth of July Celebration on Monday evening.

Lancaster city officials are one step closer to updating its political lines for the next decade.

The city’s proposed redistricting maps are now ready and will be unveiled during a public hearing July 12 at Lancaster City Hall.

That night, Lancaster City Council will also consider first reading of an ordinance to adopt the maps, which were prepared by the S.C. Revenue and Fiscal Affairs (SCRFA) Office in Columbia.

Hutfles met with The Lancaster News on June 30 to discuss the redistricting plan, which must be in place by Aug. 1.

That is when filing begins for the upcoming nonpartisan City Council elections in November. The seats for Lancaster mayor and city districts 1, 2, 5 are up for reelection in November.

“One of the initial proposals basically split Pardue Street in half and that was not going to work,” Hutfles said. “You try to balance the demographic makeup with keeping neighborhoods intact.

“Another goal is to keep your incumbents within the districts they represent. We waited because we did not know who the representative for District 2 was going to be,” he said, noting that Marsh was elected to council in May’s special election.

The redistricting process repeats itself every 10 years requiring the maps to be redrawn to assure “One person, one vote,” as well as meeting federal requirements and court decisions.

The U.S. Constitution, the state constitution and law require South Carolina to redraw the electoral lines so that people have equal representation within various levels of government as populations increase and decline.

This is done to comply with the equal protection clause of the 14th Amendment to protect the principle of “one person, one vote.”

The U.S. House districts, as well as the State Senate and House and county council district maps must also be redrawn.

The city of Lancaster did not redraw its voting districts 10 years ago because there was not enough of a population shift to warrant redistricting.

But that has now changed.

The latest census numbers places the city’s population at 8,460, which means the six council districts must be divided close to 1,410 residents per district to assure equal representation. The numbers are based on residents, not voters.

The number of residents can’t deviate more than 10%. The SCRFA recommends a deviation of 5%, or less.

As drawn right now, city Districts 5 and 6 are overpopulated.

Here is the population by city district, according to the 2020 Census, along with the deviation numbers:

The proposed maps that City Council will consider show the following populations, which comply with the target number of 1,410 residents per district.

But based on the proposed lines, that number is not guaranteed. The census data now shows the city’s Black population as 49.1%. Whites make up 38.8% and Hispanics make up 8.9% of the city’s population, with other races making up about 3%.

“When you look at the numbers, we are pretty much a split population,” Hutfles said.

While census data shows that current city Districts 5 and 6 are overpopulated, the proposed maps shrink both of those districts down in size.

Here is a rough overview of the proposed changes:

• District 1 — Represented by Hood, District 1 picks up Cunningham Street, Hampton Road, Sowell Street and Ballard Street along the south side of Chesterfield Avenue. It would be bordered on the east side by Kershaw Street.

• District 2 — Represented by Marsh, District 2 picks up from Willow Oak Road on the east to East Meeting Street on the north side. It also includes Pleasant Hill Street and the eastern side of Moore Street.

• District 3 — Represented by Harris, District 3 takes in the west side of Moore Street and cuts one block over to Pleasant Hill Street. It then extends northward to East Barr. It also goes across North Main Street to include the Normandy Road area near Lancaster High School and much of the Gillsbrook Road corridor to Forest Drive to the north and Plantation Road to the south.

• District 4 — Represented by Jones, District 4 expands northward to East Arch Street to Willow Oak Road and takes in all the homes to North French Street. District 4 would cross the S.C. 9 Bypass, taking in all of Clinton Avenue and a section of the North Park area from Quality Drive to North Main Street.

• District 5 — Represented by Taylor, District 5 would be bordered on the south by Woodland Drive and on the east by North Main Street. It then cuts a westward swath down University Drive to include the Gregwood subdivision. It would border the city limits on the north and west along the northwestern side of the S.C. 9 Bypass along the creek. District 5 also contains a slice of Plantation Road between Sherwood Circle to Gillsbrook Road. All of Myers Circle would shift to District 5 from District 6.

• District 6 — Represented by Ronnie Sowell, District 6 is the same, except for the inclusion of a portion of Plantation Road to Marion Sims Drive and Azalea Road. It would also be bordered to the north by the southern side of the S.C. 9 Bypass.

A Lancaster man was arrested this past week in Pineville, N.C., for embezzlement.

Garrett Scott Hammond, 38, was arrested Wednesday, June 29, and charged with a count of embezzlement.

According to a warrant from the Mecklenburg County Sheriff’s Office, the embezzlement occurred from February through November 2021.

Police said Hammond unlawfully, willfully and feloniously embezzled money totaling $54,249.38, during the above time period, according to a warrant.

The actual charge is embezzlement of property received by virtue of office or employment; officer, agent, servant, consignee, bailee, clerk over 16. 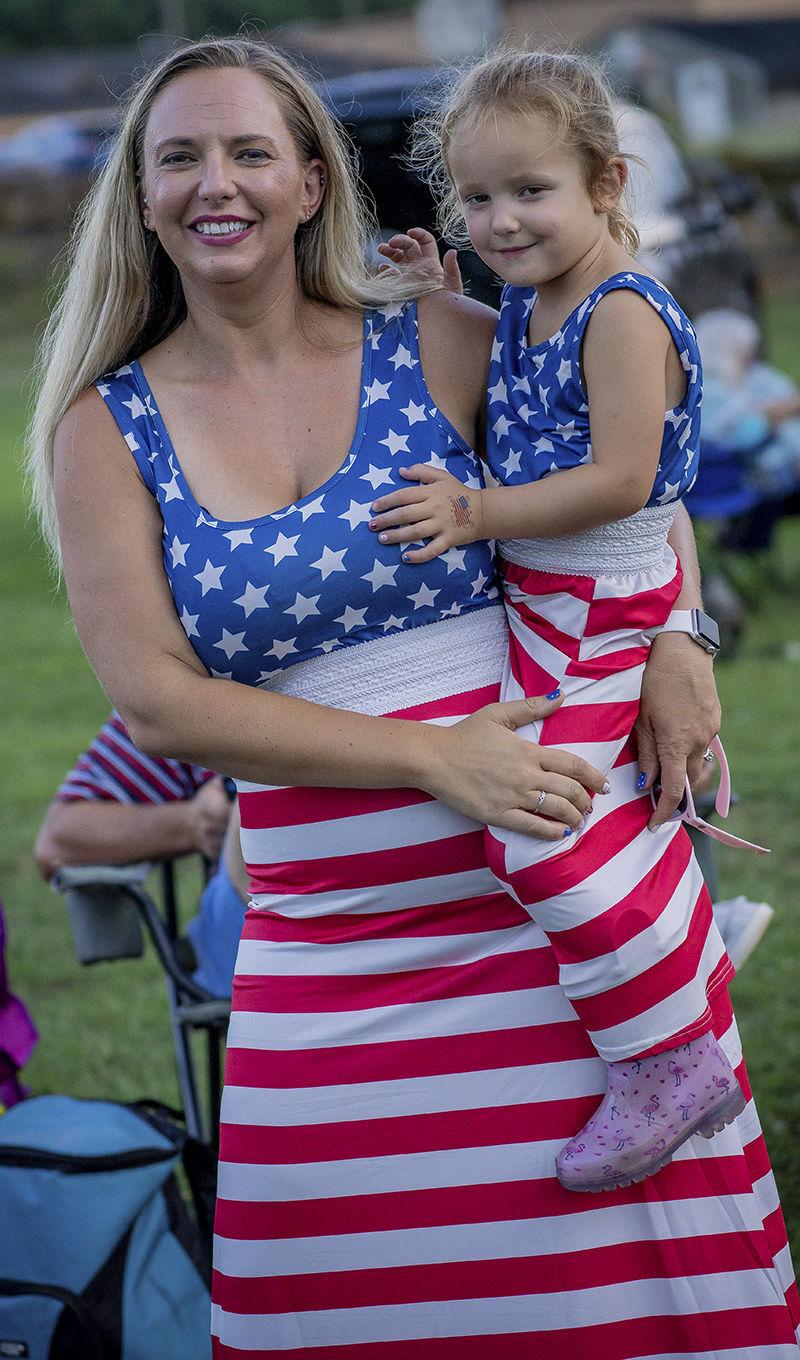