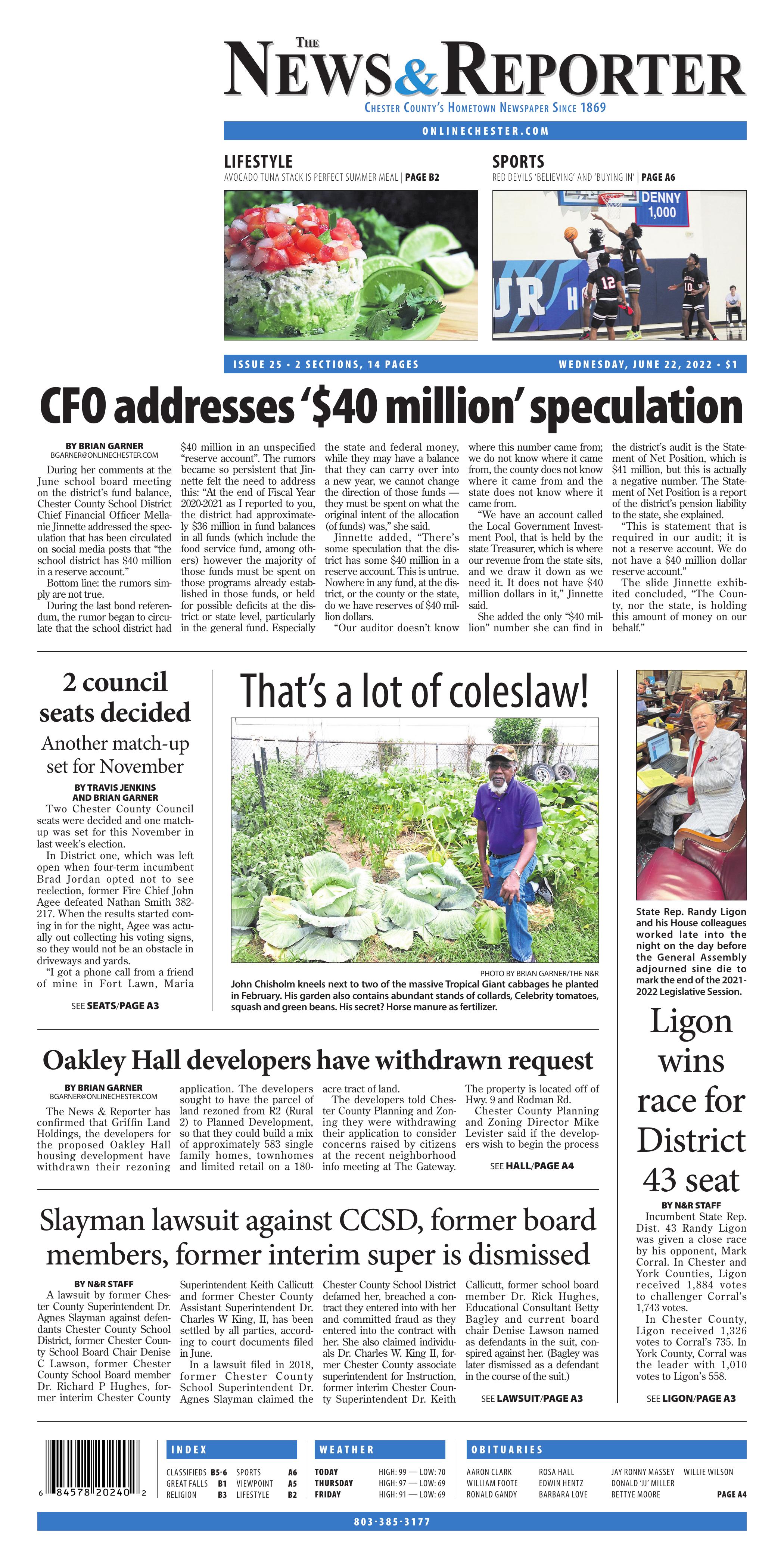 During her comments at the June school board meeting on the district’s fund balance, Chester County School District Chief Financial Officer Mellanie Jinnette addressed the speculation that has been circulated on social media posts that “the school district has $40 million in a reserve account.”

Bottom line: the rumors simply are not true.

During the last bond referendum, the rumor began to circulate that the school district had $40 million in an unspecified “reserve account”. The rumors became so persistent that Jinnette felt the need to address this: “At the end of Fiscal Year 2020-2021 as I reported to you, the district had approximately $36 million in fund balances in all funds (which include the food service fund, among others) however the majority of those funds must be spent on those programs already established in those funds, or held for possible deficits at the district or state level, particularly in the general fund. Especially the state and federal money, while they may have a balance that they can carry over into a new year, we cannot change the direction of those funds — they must be spent on what the original intent of the allocation (of funds) was,” she said.

Jinnette added, “There’s some speculation that the district has some $40 million in a reserve account. This is untrue. Nowhere in any fund, at the district, or the county or the state, do we have reserves of $40 million dollars.

“We have an account called the Local Government Investment Pool, that is held by the state Treasurer, which is where our revenue from the state sits, and we draw it down as we need it. It does not have $40 million dollars in it,” Jinnette said.

The slide Jinnette exhibited concluded, “The County, nor the state, is holding this amount of money on our behalf.” 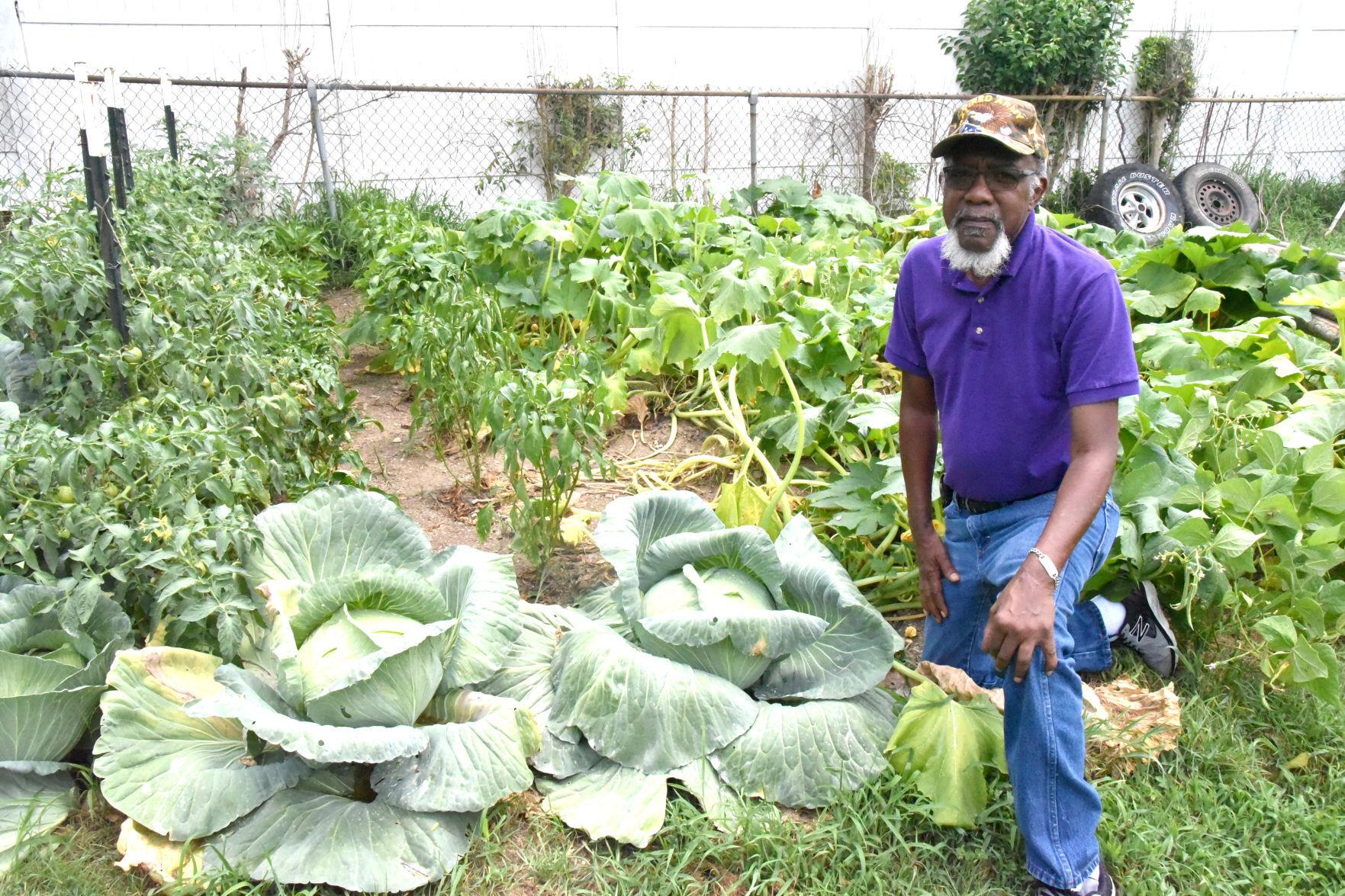 John Chisholm kneels next to two of the massive Tropical Giant cabbages he planted in February. His garden also contains abundant stands of collards, Celebrity tomatoes, squash and green beans. His secret? Horse manure as fertilizer.

That’s a lot of coleslaw!

The News & Reporter has confirmed that Griffin Land Holdings, the developers for the proposed Oakley Hall housing development have withdrawn their rezoning application. The developers sought to have the parcel of land rezoned from R2 (Rural 2) to Planned Development, so that they could build a mix of approximately 583 single family homes, townhomes and limited retail on a 180-acre tract of land.

The developers told Chester County Planning and Zoning they were withdrawing their application to consider concerns raised by citizens at the recent neighborhood info meeting at The Gateway. The property is located off of Hwy. 9 and Rodman Rd.

Chester County Planning and Zoning Director Mike Levister said if the developers wish to begin the process again, they would have to submit an entirely new rezoning request application.

The defendant’s attorneys also filed a motion for summary judgement in the same month, asking for the court to dismiss all the causes of action in the lawsuit.

Then close to the end of May, Dr. Slayman’s attorney made a motion for a continuance on the hearing on the summary judgment motion and a scheduled jury trial on May 31.

According to court documents, the ‘grounds for this motion are that the parties reached a settlement on Thursday, May 19, 2022’. The motion said the parties ‘now have a dispute regarding non-monetary terms of the proposed settlement agreement. Counsel for the parties, and Plaintiff worked on these issues throughout the weekend and Monday morning, and there appears to be an impasse on this issue. Accordingly, counsel for both parties are still intending to appear before this Court, per the Court’s preferences for appearing together in person...’

The latest filing in June shows that attorneys for both parties agreed to a dismissal of the complaints and that all parties agree to bear their own costs and fees.

Shannon Polvi, representing the attorneys for Dr. Slayman, said in an email statement that they had no comment other than, “We are happy to have a resolution to a dispute that has spanned several years. We hope that everyone involved can move forward in peace.”

Two Chester County Council seats were decided and one matchup was set for this November in last week’s election.

In District one, which was left open when four-term incumbent Brad Jordan opted not to see reelection, former Fire Chief John Agee defeated Nathan Smith 382-217. When the results started coming in for the night, Agee was actually out collecting his voting signs, so they would not be an obstacle in driveways and yards.

“I got a phone call from a friend of mine in Fort Lawn, Maria Hedgpath and she gave me some preliminary numbers, and I was really excited. It’s been a long time since I felt almost giddy at the thought of the people’s trust they were putting in me,” he said.

Agee said one of the first calls he made on Election Night was to Richburg Mayor James Harris, and he told Harris that he would do his best to represent the people in Richburg. The same holds true for the people in Fort Lawn and the other areas of his district, Agee said.

Agee said if his reputation and recognition as the Fire Chief of Richburg helped his campaign in any way, that’s because there were a lot of people that helped make that reputation.

Agee believes that to capably serve his constituents, he has to listen to them. As such, he plans to do everything possible to stay abreast of what is happening in his district.

“I look forward to representing Fort Lawn, Edgemoor, Landsford and Richburg and the areas around there. I feel like the people have put their trust in me, and one of the things I promised the Town Councils of Fort Lawn and Richburg, I will be attending every one of their council meetings that I can get to, and bringing them information from the county council, and taking their concerns back to council,” Agee said.

The District five Democratic Primary was a close one with Corey Guy edging out Tammy Williams 268-254. Public service is obviously a family tradition for Guy, as his two immediate predecessors in the district five seat were his mother Mary (who opted not to seek reelection) and his father George. He said he ran on the slogan of “Being a servant and not a politician” because he will make decisions in the best interest of Chester. He thanked voters for their support and promised to work with the rest of the Council to create budgets and policy to “move Chester County in the right direction.”

“I want to use this opportunity to let the Citizens of Chester County know that I totally understand that holding this seat is not about me but about the Citizens that I will represent. I have lived in Chester for a total of 45 years and throughout those 45 years I can remember many of Chester’s highs and lows and I want to help be a part of building Chester to its highest potential,” he said.

He said he was raised to be a servant “for Christ and community and God saw fit to continue this legacy of community service.” He also acknowledged that many others helped pave the way for him long before he decided to run for office.

“I am walking on the shoulders of the late Beauregard King, Christopher C King and William ‘Bill’ Hunter who worked diligently and spent their own money and petitioned the Supreme Court to make it possible for a black person to hold a office in Chester by fighting for single member districts, restructuring district lines, getting people registered to vote, and encouraging citizens like George ‘Bunny’ Guy, Rev. Bill Stringfellow and James Gore to run for city and county elections,” he said. “Growing up witnessing all of this and watching my mother Mary A. Guy hold this office is my motivation to serve the community and also prepared me to hit the ground running.”

With Chester County having voted to switch from an elected supervisor to a hired administrator, a new, at-large council seat is being created. In the Democratic Primary, William King defeated Alex Oliphant 966-892. Oliphant, a former multi-term council member, wished King and the county the best.

“Congratulations to William King. To my many supporters I say thank you from the bottom of my heart. I’ll continue to do what I do best, love Chester County and keep trying to make it a better place,” Oliphant posted on Facebook shortly after the results were final.

King did not respond to a News & Reporter request for comment. He will face Republican Erin Mosley and Libertarian David Beverley Sr. in November’s General Election.

State Rep. Randy Ligon and his House colleagues worked late into the night on the day before the General Assembly adjourned sine die to mark the end of the 2021-2022 Legislative Session.

There is reportedly a challenge to the election results that will be filed in court following the decision of the York and Chester County Election Commissions to certify the results, following a hearing on Corral’s challenge of the votes.

Ligon thanked the voters for putting their trust in him to represent them.

“I am thrilled and honored, and I recognize that it is a privilege for me to serve the people in District 43, particularly in Chester and York Counties,” he said.

“It is very important. I thought we got a lot done in the last few years: we did have one of the biggest budgets and surpluses ever in South Carolina. We want to be careful to invest it properly and not to waste it and not just spend it because we’ve got it.

“I look forward to going back to Columbia to try and hold the conservative line and carefully investing our money in the people of South Carolina, and returning as many dollars as possible back to the people of South Carolina. And we are doing that, with a tax cut, with more funding of schools, and we’re returning a billion dollars to the road funds, and that’s going to make tremendous strides in trying to catch up on the many years of neglect in our roads and bridge systems,” he said.

Ligon said with everything happening in Chester County, like new industries and the promise of whitewater facilities and increased tourism to come, it was obviously important to voters to have a resident legislator in the county.